We just returned from a few days away. Five days and three National Parks might sound like too much territory to cover, but we made the most of the time we had available. If you’re interested in seeing GIANT trees, as I hope you will be, I’m organizing the photos now and look forward to sharing our most recent field trip.

First, however, it’s time to revisit Point Loma, San Diego. The top employer in San Diego is the United States Navy. With the largest naval fleet in the world, San Diego is home to US Navy facilities, Marine Corps bases and Coast Guard stations.

Point Loma is home to a very large naval base, with an active operations history going back to 18th century Spanish rule and including successive activity since before the Civil War through two World Wars.

For those interested in military history or naval installations, Point Loma/San Diego is easily researched and quite interesting. But I found one story of particular interest.

We hiked a few simple trails in the area and noticed this sign.

Remnants of World War II era military defense fit prominently in the side of the bluffs and hillsides overlooking the Pacific Ocean.

A small museum provided additional information to explain how important this and other coastal naval fortifications were in the weeks and months following the attack on Pearl Harbor. Fears were heightened to near panic with warnings that coastal California was vulnerable to the next attack.

There were reports of Japanese submarines off the coast of San Diego, and adding to this suspicion was underwater sonar detection picking up the sound of enemy submarines.

Every winter Gray Whales migrate between Alaska and Siberia to their breeding grounds in Baja California and mainland Mexico. Coastal San Diego is considered a “whale highway.” 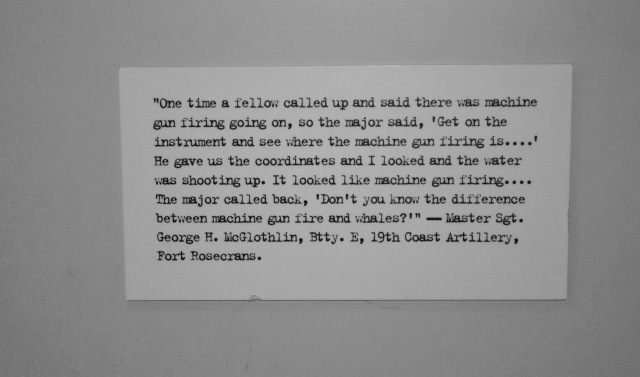 It’s easy to be amused at the misreporting and to chuckle at the potential embarrassment of mistaking a whale for an enemy submarine, but we know that the fear following Pearl Harbor was heightened with the very real potential of coastal vulnerability. This condition sadly lead to a Presidential evacuation order and round-up of 120,000 Japanese Americans to one of 10 internment camps in California, Idaho, Utah, Wyoming, Colorado, and Arkansas, with many more temporary holding centers.

We originally set out to visit the Cabrillo National Monument mostly interested in the Spanish history. But do you, like me, give in to curiosity and wander a little further and ask what’s around the corner?

It was a pleasant surprise when we located the World War II bunkers and artillery sites. I really enjoyed learning a little more about the military defense posts in this area, and we wouldn’t have found them without wandering a bit.

If you want to come with me on one of my field trips, be sure to wear comfortable shoes!

“Always walk through life as if you have something new to learn, and you will.”