Years ago as an early childhood educator I played around with the idea of writing a holiday book for Southern California children. Most of the under-six crowd in my classroom had never seen a snowman and didn’t own “warm woolen mittens.”

I went to the beach in December and took photos of people rollerblading  in swim suits, whizzing by homes elaborately decorated for Christmas. Little children played at water’s edge and there was little to distinguish the date from a summer photo, except the slant of the sun was a winter’s angle and not as harsh as in summer. It’s really quite beautiful. 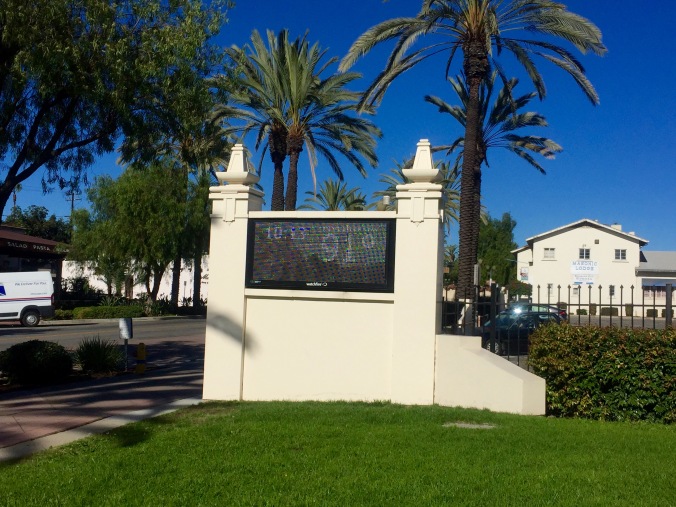 This photo was taken last week. We enjoyed our turkey dinner and family festivities outdoors under the backyard oak tree, and we enjoyed a game our two until close to 9 PM.

We don’t decorate with real pumpkins. It took me a while to give in to artificial, but at least they don’t turn to mush in the harsh sun!

We have gradually shifted more towards either California Natives or at a minimum, California “friendly” drought tolerant plants. Although some of the groupings in my current landscape are no more than a couple of years established, I’ve been delighted to note seasonal changes.

Yes, the temperature may register a July-high in November or early December, but the nights are colder. There is often a nearly 40-degree shift between daytime and nighttime temperatures, and those differentials play a role in the way the succulents  respond. 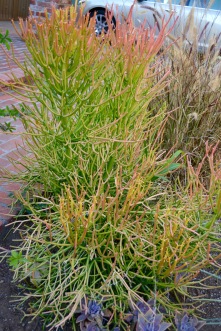 The vibrancy and hue of colors is different this time of year. The subtle, yet observable change is delightful. 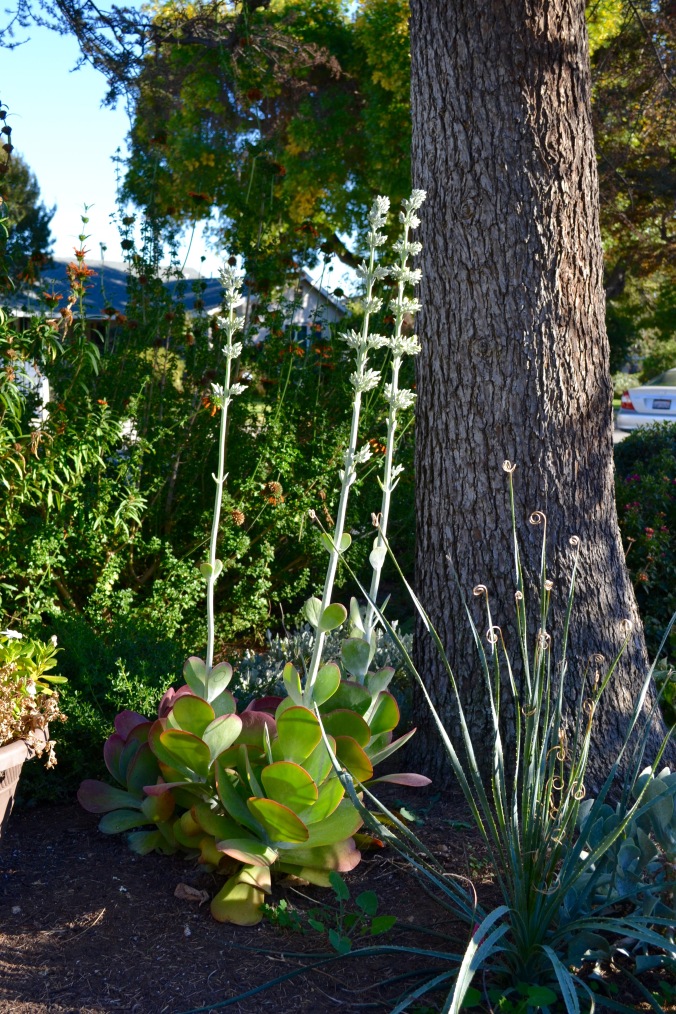 Kalanchoe lucite (Paddle Plant) with its spiky “sentinels” is readying to bloom.

For multiple years now I’ve sent inquiries to the most established monarch butterfly experts asking for advice about how to prepare my garden for these beautiful visitors. And all I’ve received is conflicting advice.

Originally I was told to either cut the milkweed back to the base or start with new plants in the spring. So I followed that advice and then in the early spring we couldn’t provide enough leaves for the caterpillars and the result was heartbreaking.

So this year, I didn’t drastically cut them back, and then I wonder if we’re upsetting their migration.

I hope he finds his way to wherever he needs to be!

And then we have “Winter with Darwin” to consider!

Despite my protestations, he has continued to dig his winter burrow under our outdoor water heater and about half-way under one small section of foundation. I stress over this, but he thumbs his nose at me and I’m going to have to let him be a tortoise. His instinct tells him this is it!

When we have sunshine, he still comes out and spends the day meandering, returning to his burrow by late afternoon. He doesn’t technically hibernate, but goes with the sunshine. If we have a cold winter, I will see less of him.

I have gradually given over all of my vegetable garden space to Darwin, and this year decided to invest in some above ground redwood containers. We planted rainbow chard, a variety of lettuces and peas–a few winter vegetables.

That greedy tortoise figured out how to stand up against the box and reach in to eat some of the tallest leaves. I wouldn’t believe it, except my family caught him in the act. Thus ensued the building of the cage to surround the garden. He really is a lovable pest!

The bird feeders are still amply filled, but the birds have all but vacated. Where did they go?

I wish I had captured a photo of the squirrels burying acorns all over the yard! These silly creatures ought to know by now they can skip this ritual. They’ll have plenty to eat even in the bleak winter months. But nature tells them otherwise.

I must admit that I have often thought if I lived in a colder climate I might not survive. But my friends who get excited every year at the first snow have at least made me very curious!