I was determined to post by Christmas. Failing that, I set NYE as my next reasonable goal. Some of my blogging friends in the Southern Hemisphere have already rung in the New Year while I anticipate the countdown to 2023 in several hours, west coast time zone.

We’ve added to our family, and my role and responsibilities expanded in what can often feel like the busiest of seasons.

We were anticipating the birth of a grandson late in December, but he surprised his mama by arriving three weeks early. She wasn’t the only one surprised.

The first week of December our son called and asked if there was a chance I could come up early–as in NOW! The original plan was for me to arrive a couple of weeks later and be the grandparent-on-site to care for the baby’s 5-year old big brother. Jay had some appointments that couldn’t be changed, so off I went, unsure of how long I would be needed.

A healthy baby boy arrived less than 48 hours later, and I had the joy of being the first to celebrate with his delighted parents and big brother. Respecting my son’s desire for privacy I won’t post photos, but you can take my word for it that this precious new life is simply beautiful.

But I can share photos of our other new adoptee! 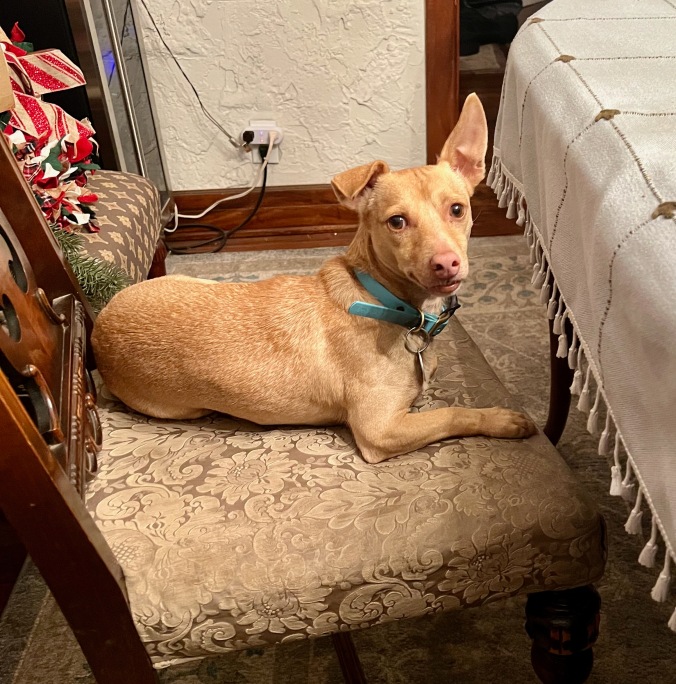 Once more this month I became a grandmother as Aimee and family adopted Mr. Burns from a reputable dog rescue organization. He won’t be two until later this spring, and like so many rescues, comes with a sad story. But in our busy household he is surrounded by so much love and attention I’d say he’s already quite spoiled–if you really believe you can possibly give too much attention to a love-starved creature.

Aimee is definitely his person, but, as good grandparents we do our best to comfort him when she is not home. This photo is representative of many times when he is poised to sit and wait for her return.

You’ll notice he is wearing a leash or a lead. He is quick! And he is still a little skittish and can be difficult for me to “corral.” He does seem to expect me to take him on multiple walks each day, however, but I think that’s because he expects a treat at the end of that walk. He’s smart. 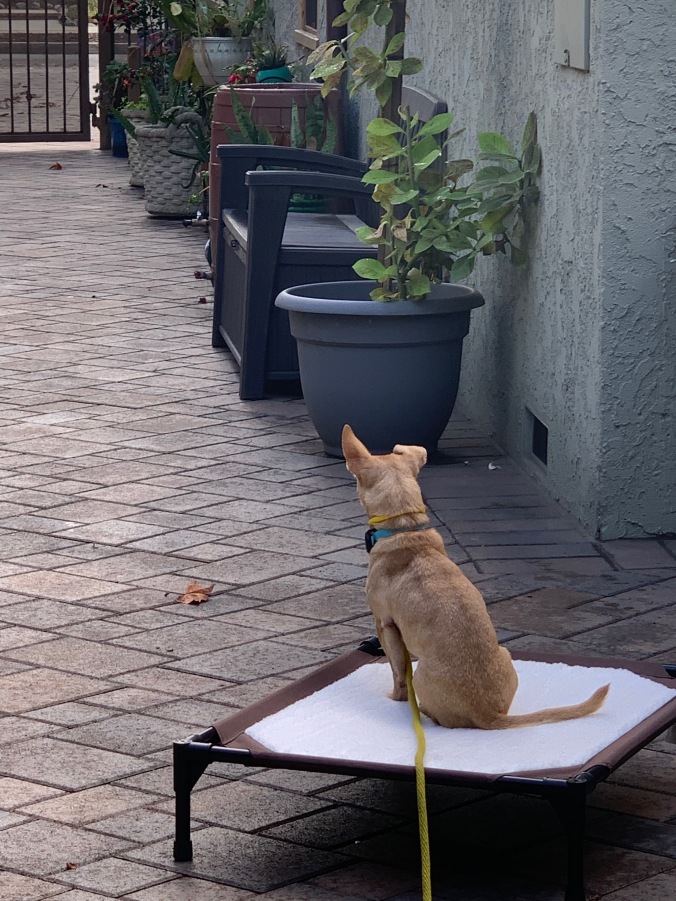 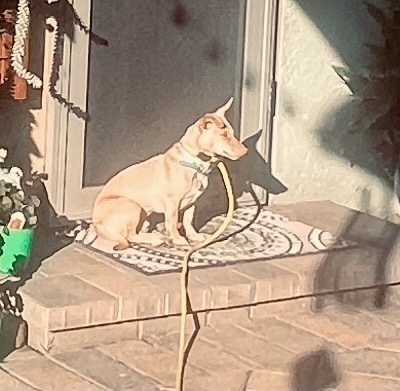 Most mornings he likes to find a sunspot and just enjoy our typical warmth. We’ve had quite a bit of rain yesterday and today, however, and I’ve been walking him, umbrella in hand, and laughing that I can’t believe I’m doing this. Our dear Zena was more than happy to “do her business” in our backyard. Weather was never a factor.

Mr. Burns, however, fully expects a good walk at least a couple of times a day.

Maybe I’m the one who deserves the treat!

Happy New Year, my friends. I hope that you can find your own proverbial sunspot and ring in the new year with peace and hope and a measure of joyful expectation that as one year closes and a new one opens,

“all shall be well

and all shall be well

and all manner of things shall be well.”

Native Southern Californian with a love of poetry, music, yoga, gardening and regular dips in the Pacific Ocean. I'm passionate about protecting the environment and passing on my love of the natural world to my four beautiful grandchildren.