I have spent many pleasurable hours at Los Angeles Union Station, the largest railroad passenger terminal in the western United States.  On more than one occasion we traveled by train for New Orleans via Amtrak, enjoying many points along the way. More frequently we take the Gold Line from Pasadena to Union Station –just for the fun of it.

Whatever our final destination, we always enjoy our time at the beautiful station and the sense that time has stood still.

In 1939 the city threw a 3-day celebration drawing a festive Los Angeles crowd of half a million enthusiasts gathered to celebrate the opening of the $11 million grand train station.

To enjoy some rare video footage of that event, click HERE.

After years of political wrangling just to get it built, the ebullient public celebrated a unified track system, and this Saturday, May 3rd, Union Station will be fêted in a highly publicized grand celebration of 75 years of city railway history.

Built in 1939–the same year as the premiers of both Gone With the Wind and The Wizard of Oz, the station was finally completed, serving the needs of the Atchison, Topeka and Santa Fe Railway, Southern Pacific Railroad and Union Pacific Railroad.

There is something really beautiful and special about historical train stations. The cost of duplicating this workmanship would be prohibitive today. 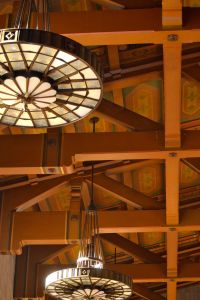 What I didn’t know, is that there was another station BEFORE Union Station.

The busiest point of entry was Southern Pacific’s Central Station, built between 1912 and 1915, with 1923 welcoming 1.2 million tourists to Los Angeles.

Early in the 20th century tourists were met at Central station with a free bus ticket to the suburbs and handed real estate folders broadly hinting that oil might quite literally spurt from the ground, so why not buy property in Southern California, and participate in a petroleum based “gold rush?”

Union Station was a significant hub of activity during World War II as one hundred trains a day brought thousands of passengers through its terminals.

When the war ended, the glory days of train service in Los Angeles took a “back seat” to the independence of travel by automobile and the birth of the freeway.

Today, in addition to Amtrak service, Union Station also serves as a central hub for Los Angeles’ commuter lines under the direction of the Metropolitan Transportation Authority.

According to Los Angeles Magazine, current ridership is close to 70,000 passengers a day between Amtrak, Metrolink, the Gold, Red and Purple lines, with Union Station handling a million more people every two weeks than during the war.

The distinctive architectural fusion of Spanish Mission architecture with a modern Streamline style makes the station popular with the film industry. It’s always popping up in movies, television and commercials.

I could share many interesting stories from the early era of train travel and memories associated with this station, but  wonderful articles have recently been published and for the interested, there is currently a wealth of easily accessed information.

I think I’ll just share some of my favorite photos.

Do you like to take the train? What’s your favorite train travel memory? Maybe you can share your own story next Saturday, May 10th, in celebration of National Train Day.

Train travel is a lovely way to exhale!

Enjoy your weekend, my friends.