The La Brea Tar Pits are tremendously interesting to anyone who lingers long enough to consider what it’s like to literally stand at the edge of an open science lesson situated in the middle of one of the most densely populated cities on the planet. The Pits provide answers to those studying prehistory while also, like all effective research, opening whole new lines of questions yet to be studied and answered.

One of the aspects of the Pits that most fascinates me today is the location. This large body of goop is situated on Wilshire Boulevard on a stretch called The Miracle Mile, named for its significant number of affluent business addresses.

In the early 1920’s this then unpaved stretch of road extended through dairy farms and bean fields.

But real estate developer A. W. Ross understood how the rise of the personal automobile was going to change Los Angeles and he envisioned a retail district that was at the time unprecedented.

Today the stretch is also known as Museum Row, home to many prominent and elite museums, including the Los Angeles County Museum of Art, which also happens to be right next door to the Tar Pits.

Nestled in with museums and restaurants, the bubbling methane exists as a reminder that Los Angeles is built on one of the world’s deep pocket oil provinces–approximately 50% greater than the East Texas field and almost as much as Prudhoe Bay, Alaska.

The existence of so much oil, methane build-up and other implications for a healthy environment are of serious importance to me. The more I read and study, however, the more questions I have. I’ve been on a reading frenzy, but I can only go so fast.

So for now, I’ll stick to what I know.

The oldest organisms found in the tar Pits is a wood fragment that dates from 40,000 years ago. And the most common large mammal found are dire wolves. The ancient predator was about the size of a modern-day wolf.

But the second more common fossil found is the Smilodon californicus. This sabre-toothed cat is also the California state fossil. Hundreds of thousands of its bones have been found, representing thousands of the big cats.

Mammoths, mastodons and short-faced bear–it was still more than 11 feet tall–two species of bison, one with seven-foot horns– and surprisingly, camels that stood taller than modern dromedaries, have all been found in the tar pits.

At least 59 species of mammal and over 135 species of bird have been found. Including vertebrates, plants, mollusks and insects, over 660 species of prehistoric organisms have been identified.

When I was a child I believed the Tar Pits were also the source for dinosaur bones. A visit to the site was usually accompanied by a trip to the Natural History Museum with the large dinosaur bone exhibits, and I lumped all prehistoric animals into the same gooey tar mess. But there were no dinosaurs bones at the La Brea Tar Pits.

In fact, dinosaurs were long extinct before the tar pits occurred.

But there were human remains. In 1914 excavators uncovered a woman’s skull and partial skeleton, dating her death at about 9,000 years ago. Her skull was fractured suggesting a blow to the head. 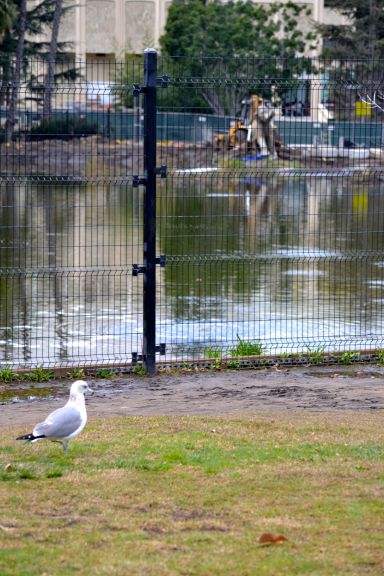 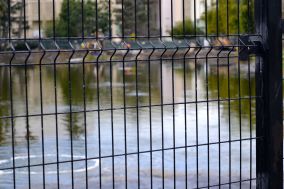 The Chumash people who populated the land that became Southern California used the oil and tar to help pitch their boats, but the existence of the fossilized animal remains wasn’t discovered until 1901 when W.W. Orcutt, called the “Dean of Petroleum Geologists” came from Minnesota to Los Angeles as the manager of the Geological, Land and Engineering Departments of the Union Oil Company.

The La Brea Tar Pits and accompanying George Page Museum is a worthwhile “field trip” for anyone visiting California.

It’s impossible for me to stare at the pits and not consider what is bubbling underneath our shaky, earthquake prone crust. Because California is sitting on a massive amount of shale oil, controversies and debate are ever-present as to whether we will be the next oil boom state.

California has a legal mandate that the state receive 33% of its electricity from renewable sources, such as wind and solar energy, by the year 2020. That’s just seven more years.

But in the complicated mechanisms that generate wind and solar energy, fossil fuels will still be required to fuel turbines that will be “ready” during the intermittent times renewable energy sources are not fully capable of keeping pace with energy requirements.

In other words, it’s very complicated.

I’m immersed in reading on the subject, so I can just about assure you we’re not done yet.

It’s a fascinating and deeply troubling question as to how California will face future energy needs. On the whole I don’t see many moves to be more resourceful or conservation-minded. But that’s another story for another time.

In fact, that’s one of my particularly favorite rants, and if I can frame the topic in a way to be more pleasantly conveyed, I may come back to that.